Home > Newsroom > News in France > Launch of the Simone Veil Prize of the French Republic – 8 March (...)

On 8 March 2019, President Macron awarded the first Simone Veil Prize of the French Republic to Aissa Doumara Ngatansou, the Cameroonian co-founder and coordinator of the Association for the Elimination of Violence against Women (ALVF) working in the Far North Region of Cameroon. 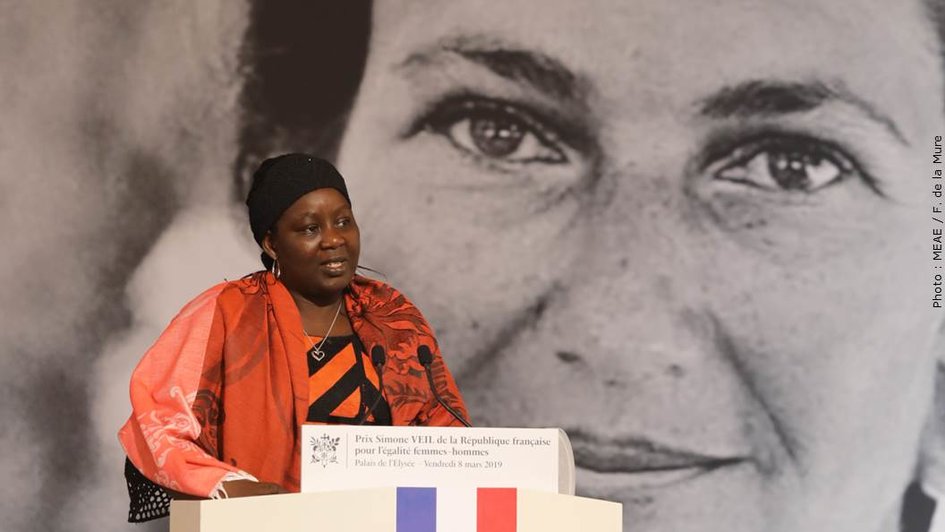 The Simon Veil Prize honours people from around the world who are fighting for women’s causes, thereby continuing Simone Veil’s fundamental engagement.

Its main purpose is to showcase action to end violence and discrimination against women, improve their access to education and knowledge, promote their autonomy – first and foremost their economic autonomy and their opportunities for entrepreneurship – and their participation in leadership roles.

On 8 March 2018, the Minister for Europe and Foreign Affairs announced the creation of this Prize. France intends to show its support for the rights of women from around the world, and promote gender equality, France’s big national cause for the five-year term and one of its priorities internationally, which can be seen in France’s international strategy on gender equality (2018-2022). The Prize is awarded every year on 8 March on International Women’s Day, which was created by the United Nations, along with €100,000 to finance action in the field that is conducted or recommended by the Prize winner.